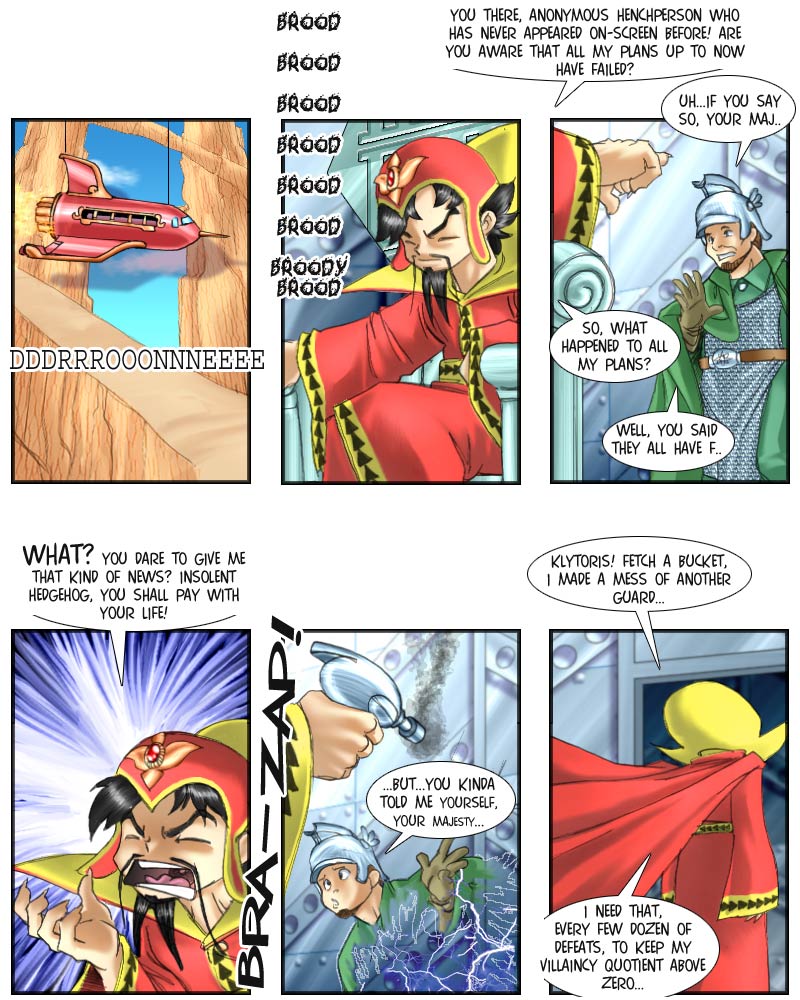 Gradual loss of villaincy is a problem all villain characters have to face, sooner or later, if they appear as a regular opponent in any kind of episodic work of fiction. No matter how overwhelmingly villainous the character starts out, and no matter how often you have other characters point out how the villain is a “criminal genius” or that “the mere mention of their name inspires fear”, and no matter how many horrific deformities you equip them with – after a straight series of dozens of defeats at the hands of a group of plucky teenagers (and their dog), the once imposing villain will inevitably drift closer and closer to the comic relief league.

To avoid that problem, villains require regular recalibration of their villaincy, and there are many ways in which a scriptwriter can do that in a subtle and plausible way. But for B-movies, they most tipically stuck with the simple and implausible: the random execution of henchmen for minor (often only perceived) slights. In the cheapest variant of this little shtick, they wouldn’t even sacrifice the most minor of minor characters the audience might care about – no, they just introduced some new anonymous henchman just-in-time for his prompt and cruel departure. Often, this was set up as a “shoot the messenger” scenario, since that would also allow the villain to be choleric and irrationally vindictive. (Our villain cheated a bit on that, though.)

As a side-effect, the whole scenario can also be used to establish that the villain is carrying a weapon, heightening their threat level for the inevitable confrontation with the hero. Choice of weapon being, naturally, an important facet of the character’s overall villainous persona:

– carrying a gun (or raygun, lasergun etc.) can turn the most physically unimposing of villains into a plausible threat for an able-bodied hero, and helps to legitimize the use of deadly force against the villain. It makes the villain appear cowardly, however, and that might not be desired in all cases.

– traps, technical devices and one-of-a-kind weapons can make a quirky villain much more stylish and memorable.

– swords and all kinds of weapon requiring physical skill put a villain on a much more equal footing with a hero. A must-have for deluded-but-honorable villains and any villain the audience is supposed to feel sympathy for

– naturally, master manipulator type villains can heighten their awesome considerably by eschewing any kind of weapon, and confronting the heroes armed with nothing but their wit. Doubly effective when the heroes come equipped like a tank brigade. (Never bring a bazooka to a battle of intellects.)

Anyway, I guess our villain has successfully recovered what little villaincy he orginally possessed, so let’s see what he makes of it on Monday. A new voting incentive is up, as well.