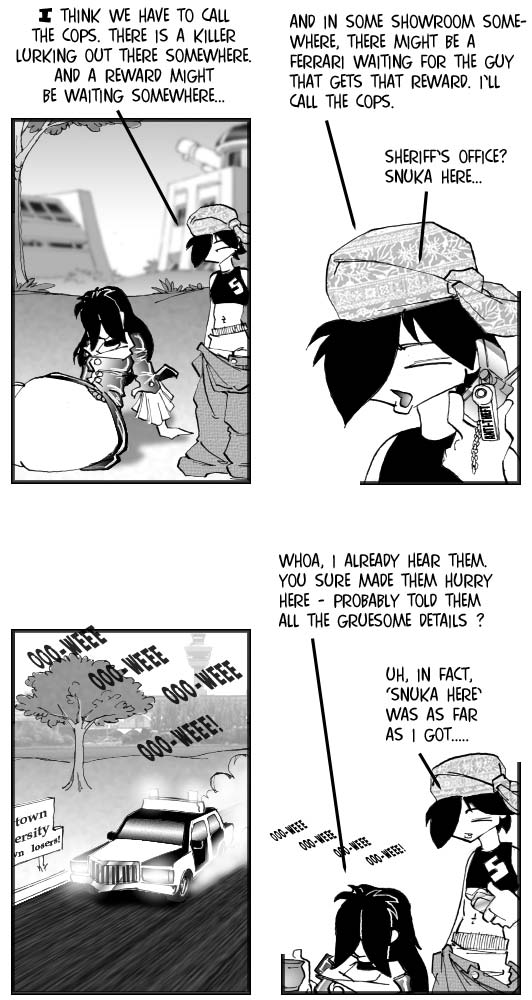 Seems young Mr. Snuka already has made a bit of a reputation for himself in his new home city. It would also appear like he had already been introduced to the Sheriff at some point, likely during some social function honoring worthy young citizens, I’d guess.

Incidentally, the Sheriff even named a motion to the city council after him – Motion # 4613354 a.k.a. ‘Snuka-motion’. Something about the re-introduction of tarring and feathering, if I’m correctly informed. Narrowly defeated.

Scenes of speeding cars were a firm favourite of B-movie directors in the 50ies. While such shots are a legitimate way of linking scenes together in certain cases, the device got seriously overused in many movies – often, like in today’s strip, just interrupting a scene without adding anything in particular (just look at the strip again – without panel 3, it would work out exactly the same). On top of the sheer gratuitousness, some directors ‘augmented’ those scenes by speeding them up to make the car appear faster – an effect that nearly never turned out looking anything near realistically.

In this, as in many other, regards, ‘Beast of Yucca Flats’ takes the .. .uh, what’s the opposite of a crown in this case? The king’s seat cushion? Around a third of the movie is made up of scenes of cars senselessly speeding about through empty scenery. Usually, the same cars over and over again. Still, it’s actually the better third of that movie. They should have called it ‘Cars of Yucca Flats’ and cast Tor Jonson as undead used cars dealer…

On Thursday, Snuka’s nerves will be severly tested, though – who will win- Ferrari or fear?

Title: What’s in a name?

Text: Some people have to explain things at length, for others it’s enough to just say their name – but is that really something to be proud of?