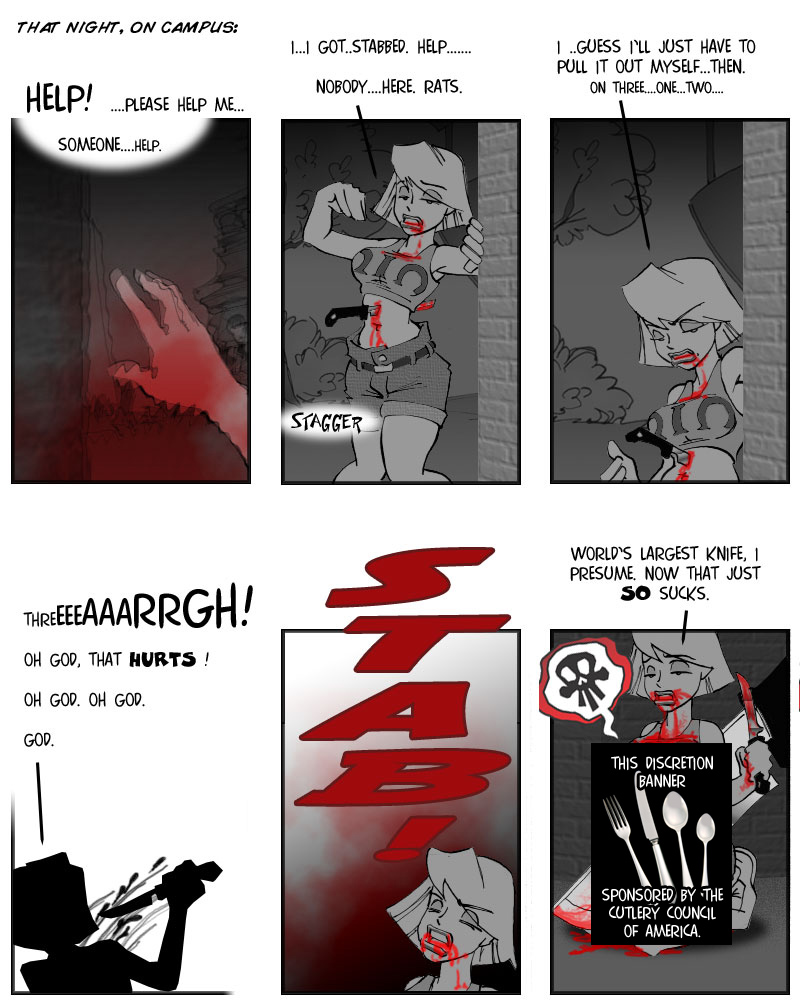 Ouch – that looks like it really hurts. Sorry for the splatteriness, but I couldn’t avoid it totally for this chapter – but it won’t get that graphic again, don’t worry.

But this is just something absolutely mandatory for a certain category of B-movies – usually, they even put the busty-girl-being-gruesomely-eviscarated-scene before the opening credits. Compared to Ed Wood’s method of having people walk of the screen and indicating their death by dubbing a scream over the freeze frame, this approach at least firmly establishes the fact that the character is dead. Yet, somehow, I doubt that that is really the reason why this gets used so often. One of the inexplicable aspects I have observed about this phenomenon is that the victim in question always appears to be female, and is usually young and rather well endowed, cupsize-wise. I have yet to actually see any such scene featuring a balding, overweight man, or a skinny geekboy. If one was cynical, one could even wonder whether Hollywood happened to stumble over some strange inclination in the viewing preferences of male adolescents, and was shamelessly pandering to that. Naw, that couldn’t be it.

Anyway, my observations allowed me to formulate another B-movie law: If a movie features a busty-girl-being-gruesomely-eviscarated-scene during the first 20 minutes, all female characters whose cupsize exceeds the female lead’s will be dead by the end of the movie. Given that our female lead is Mopey, this could turn into a massacre. XD (clobbering sounds)

In case somebody wonders what the girl has on her shirt, it’s ‘Omega-Iota-Omega’, the name of her sorority. A rather clever choice of Greek letters, if I must say so myself.

Just to be on the safe side, a disclaimer: Don’t stab yourself with the world’s largest knife, and avoid people who try to stab you with it. The same goes for smaller knifes, but naturally less so.

There might be just the slightest chance that my Internet exile might be nearing it’s end – keep your fingers crossed, please.

And last but not least, a new voting incentive goes up today. It’s another Episode III themed one – I just don’t get to watch enough movies. Unfortunately, whenever I feature the Emperor, I can not stop myself from repeating his text again and again loudly in that incredibly overacted way. I get quite the funny looks for that. On Thursday, it’s time for the first look behind the scenes of this new chapter.