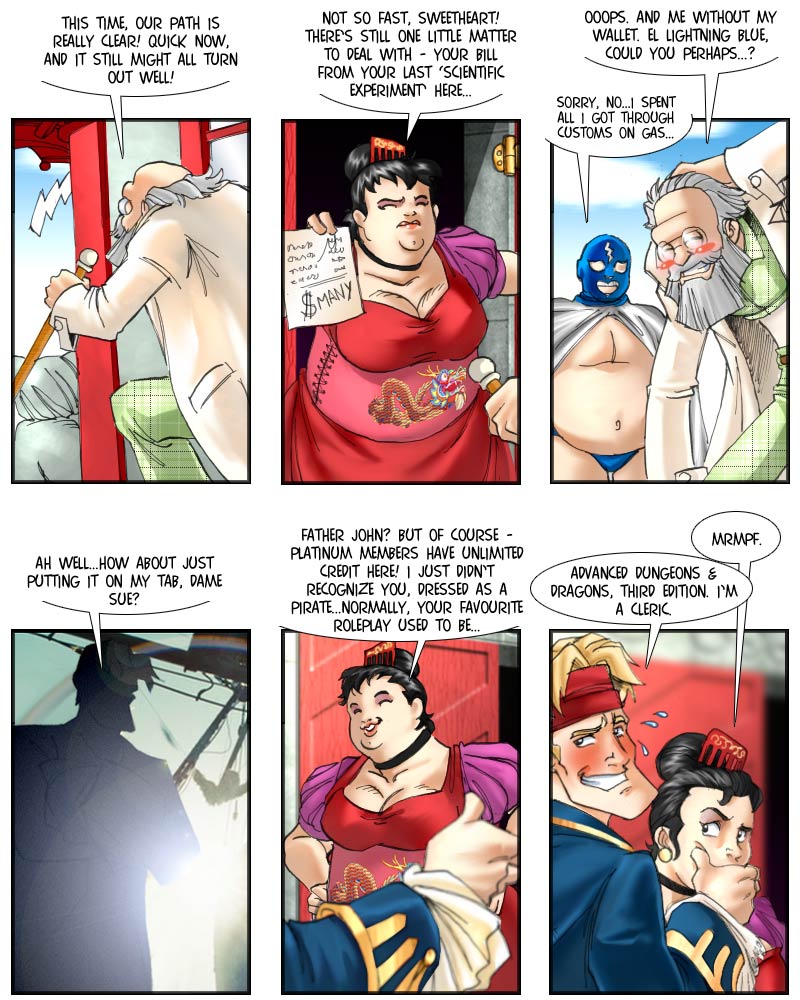 Yes, the Professor often rents out part of China Dame Sue X’ brothel Private Society for the Appreciation of Oriental Culture for his scientific experiments – based on empiric evidence, it’s the most cost-efficient solution. It’s not like the rent per se would be cheap – but the Professor has found that, for some reason, all the prominent citizens of Lillytown he happens to run into in the place are unusually receptive to the idea of donating a moderate sum of money to the University. Especially if in exchange he offers to forget about running into them there.

Of course he’s also happened to run into Father John there, a couple of times. Apparently, the former priest is an avid roleplayer and his group holds their sessions at Dame Sue’s. Twice or thrice a week. Obviously, they’re not doing just the usual D&D stuff, but also include cosplay – at least, Father John usually turns up there in costume. (That’s probably why he’s so easily embarrassed about the whole matter – as a figure of spiritual authority, he’d probably shouldn’t be that nerdy in public.) Not that the Professor’s any kind of expert, of course, but judging by the costume, the setting isn’t one of the usual sword & sorcery scenarios…too bad the Professor’s scientific curiosity doesn’t extend far into the field of Social Sciences. He should really have kept a journal of his observations. Perhaps he could have even found the answer to that question that’s been bugging him a bit in regards to the whole matter – why is the place called a brothel, when everybody he’s ever met there has been there for non-sexual reasons? And why does Lillytown even have a dedicated community hall, when all the various clubs and organizations invariably seem to hold their sessions at Dame Sue’s?

Dame Sue, of course, never has had any problems with Father John – she only minds the preachers outside the building. Those inside are really just like any other customer. More on Monday.